How to Use Google Ngram Viewer While Proofreading

Google offers many tools that a proofreader might use. One of the most underappreciated is the Ngram Viewer, which you can use to see how common certain words are.

So, how does the Ngram Viewer work? And how can you use it while proofreading?

What Is the Google Ngram Viewer?

An n-gram, in basic terms, is a statistical analysis of how frequently something, such as a word or phrase, appears in writing or speech. The Google Ngram Viewer, meanwhile, is a tool that allows you to generate n-grams and compare how often certain words appear.

It does this by analyzing the Google Books database. So if you search for “usable” and “useable,” for instance, you can see that the former is much more common in the archived texts. It also shows you how the use of these spellings has changed over the years. 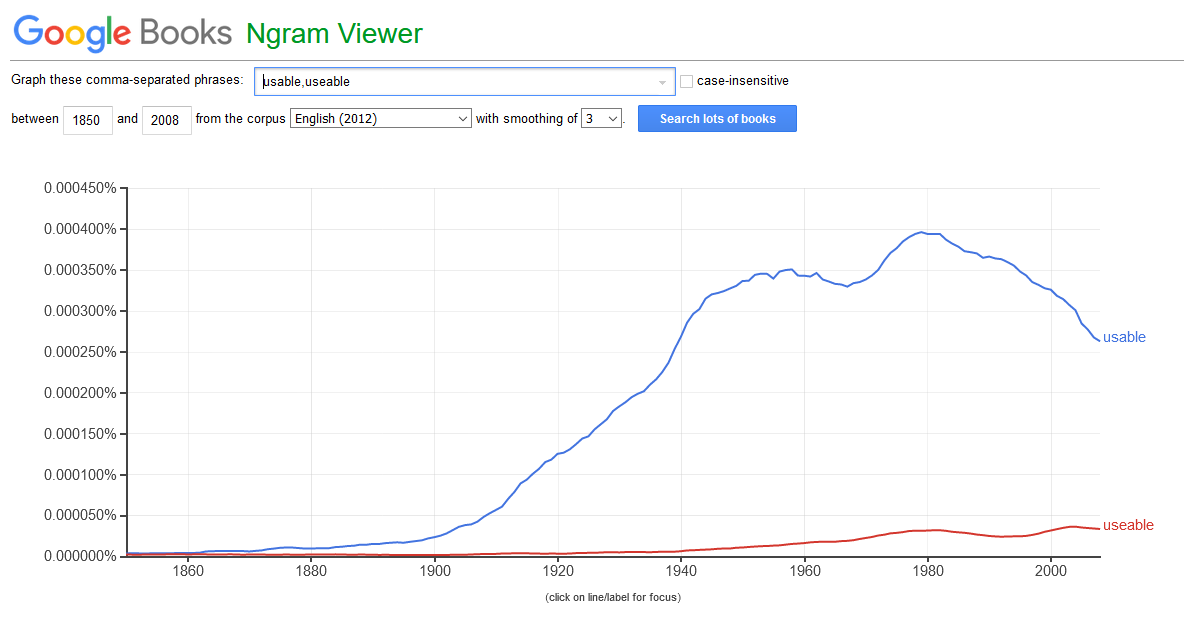 As such, by creating an n-gram you can:

In other words, the Ngram Viewer is a handy reference tool for editors and proofreaders.

How to Use Google Ngrams

To generate an n-gram in the Google Ngram viewer:

You can also adjust the “smoothing” option before searching, but this only affects the presentation of the graph, and the default setting is fine for most searches.

Before we leave you, we should raise a note of caution: Google’s Ngram Viewer is a useful tool, but it isn’t perfect! It only looks at published books, with an emphasis on scientific literature, so its results won’t perfectly reflect how people use words in the real world.

Also, clients may choose to use a non-standard spelling sometimes. And unless that causes any problems with clarity in a document, the variant spelling may be fine as it is.

Most of the time, if you feel that an author is using an unusual spelling, it is better to leave a comment noting the potential problem. You can even use a link to the relevant n-gram to show your client why they may want to use the standard spelling. But Ngram Viewer is not definitive! So remember to use your judgement when checking spellings.

Want to learn more about proofreading? Sign up for a free trial of our Becoming a Proofreader course.

Start your journey to becoming a proofreader!

Time for a change?

Sign up for a Knowadays free trial – it’s your first step towards a new career.

Ross David Ray says:
I will keep this in mind!!
Reply

Eli says:
These are really great tips. It's also very useful for seeing how the popularity of a word has changed over time.
Reply

Zulaikha Ourang says:
What an interesting and visual way to check how certain words appear. Many thanks for this great tip!
Reply

Your email address will not be published.

We use cookies to give you the best possible experience on our site. By continuing, you agree to our use of cookies. Learn More