What to Do with Tentative Language

Tentative language – also known as “hedging” – is a common feature of many types of writing. But what exactly do we mean by tentative language? And what should you do if you encounter hedging when editing or proofreading a document? In this post, we explain all.

What Do We Mean by Hedging?

If a document seems like it might be overly wordy, perhaps featuring lots of words like “seems” or “appears,” it could possibly be a sign that the author is a bit worried about making a claim that appears slightly too strong. And, as the previous sentence shows, that can affect clarity.

But let’s go back to the beginning. What is “hedging”? The “hedge” we have in mind is a word or phrase that makes what you’re saying less strong. For example:

The sentence above makes a strong claim. If we wanted to hedge this, we might say:

Most cats are capable of being vicious predators.

Here, we’ve introduced “most” at the start to show there are exceptions. And we’ve qualified the claim to say cats can be vicious, not that they always are. This is known as “hedging.”

Is Hedging a Problem?

People use hedging to limit a claim. In some cases, it may be to avoid upsetting people (e.g., the cat lover in your life who won’t admit their precious ball of fluff is a killer). But in academic writing, it is usually to avoid making too strong a claim. Compare, for example:

The first sentence above makes a strong claim. And while smoking does reduce life expectancy, we can’t say that all non-smokers live longer than all non-smokers. As such, to make our claim accurate, we hedge it in the second sentence with the word “typically.”

This use of hedging is perfectly fine. The problem comes when people overuse it or use it badly. Take the following sentence, for example, where the hedging is excessive:

Some argue that William Wordsworth may be one of the most famous Romantic poets.

Here, we have hedging that is less about accuracy and more about avoiding making a claim. What does the “may be” add here? Is this really something that needs to be argued or is it a widely accepted fact? Ultimately, the sentence would be stronger with less hedging:

William Wordsworth is one of the most famous Romantic poets.

We’ve not removed all the hedging here: we’ve kept “one of the most” because we’d need evidence to claim that Wordsworth is the most famous Romantic poet. But since Wordsworth was one of the leading figures of the Romantic movement in English – and because this is well established – we do not have to use tentative language when discussing his fame.

When to Edit Tentative Language

We should reiterate that hedging is not always bad! It can be the difference between accuracy and overgeneralization. As such, you should only edit tentative language if:

Otherwise, you are better off simply noting the hedging in a comment and explaining why it may weaken the point they’re making. Likewise, if you notice a lot of tentative language in a document while editing it, you can contact the client and ask if they’d like help with it.

How to Edit Tentative Language

The simplest way to edit tentative language is to remove the offending terms. For example, let’s revisit the first sentence of the “What Do We Mean by Hedging?” section above:

If a document seems like it might be overly wordy, perhaps featuring lots of words like “seems” or “appears,” it could possibly be a sign that the author is a bit worried about making a claim that appears slightly too strong.

The meaning here is clear enough, but the sentence is full of unnecessary hedging. As such, we could make a few cuts and revisions that will give it much more impact:

If a document is overly wordy, featuring lots of words like “seems” or “appears,” it is often a sign the author is worried about making too strong a claim.

This says the same thing in fewer words, making it much easier to read. And while the sentence above is an extreme example, with more hedging than a maze at a country house, the same principles apply wherever you see tentative language used in a document. 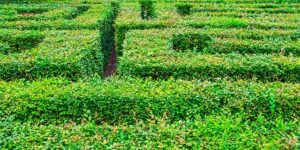 The key, then, is to develop a sense of when hedging serves a purpose. And if it doesn’t, your role as an editor is to help your client communicate their point more effectively.

Finally, let’s end on a list of terms and phrases commonly used to hedge a claim. If you see these used too often in a document, you may want to make some edits accordingly!

Our Becoming A Proofreader course covers everything you need to know to proofread documents to a professional standard. Sign up for a free trial today.

Start your journey to becoming a proofreader!

Time for a change?

Sign up for a Knowadays free trial – it’s your first step towards a new career.

Thilagavathi Rengaiyah says:
Thanks for Explaining in detail on hedging.
Reply

Your email address will not be published.

We use cookies to give you the best possible experience on our site. By continuing, you agree to our use of cookies. Learn more